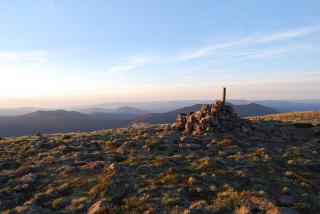 Some images from various parts and places in Victoria's Alpine National Park. There are heaps of walks you can do in the Victorian Alps. The most famous one is, of course, The Australian Alpine Walking Track. I have done all of the track but never all in one go. But I highly recommend it. It is the one track that is pretty consistently looked after. Directly after a bush fire it can be trial. The track is often gone and all the markers burned but over all it is usually easy to follow and any damage is usually fixed up relatively quickly.

But other tracks in the park, including the ones marked on maps, were burned out long ago and never recut. The ones that survive (or have been repaired) will be burnt out of existence this year, or next year. Bush fires now are so big and fierce there just isn't enough budget to keep repairing them all. So always be prepared for bush bashing through thick post bush fire regrowth, difficult navigation and difficult walking soft dirt and crumbly and fire weakened rock.

Having said all that I do most of my bush walking off track or at least with some large or small component of off track. It's fun, challenging and you find interesting things and vistas. So I recommend it but don't go by your self, be a competent navigator, carry a Personal Locator Beacon (PLB) and for gods sake, use some common sense.

One thing about trekking through the Alpine National Park, sometimes on tracks and sometimes not, is the realisation of how much "untouched" wilderness is in fact nothing like what was there before white fellas got to Australia. Much of the forest is regrowth that has been "harvested" many times. A lot of grasses and many of the plants you can see are introduced species as are many of the animals. Deer, rabbits, dogs, cats, foxes, blackberries, dandelions, rosehips - the list is long and depressing. If you hike off track you will constantly find old tracks, ruins and various kinds of debris from loggers, miners and stockmen. A testament to exploitation. Although all humans exploit to the limits of their technology. Fire farming by the aboriginals changed the landscape too - as did introducing dingoes.

But to repeat what I have said in other places in this website. "Leave nothing but foot prints, take nothing but photos".