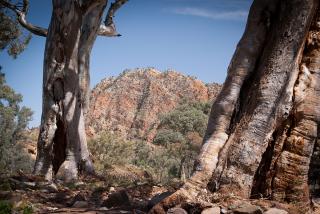 Flinders Ranges National Park was the first “desert” I ever hiked through. Looking back I realise what an easy introduction it was. Good roads, plenty of water, camp sites with toilets. Hiking through it is pretty easy but still very pleasant. The only major hick up I've ever had there was the first time I visited the park and the last time I was ever stupid enough to sleep in a creek line (to keep out of the wind – I hadn't bothered with a tent) that lead into a billabong. Every bloody animal in the park went down that creek line to have a midnight drink. I didn't get much sleep until I finally gave up and dragged my sleeping bag up the hill in the pitch black, with bare feet and praying there were no snakes.

But I find The Flinders Ranges a bit too “touristy” for my taste. Too many four wheel drivers and people in spotless white shorts. I prefer the much wilder Gammon Ranges further north. But I always make sure that I spend at least a few days there if I am in the area. There are plenty of reminders of how long humans have been in Australia but also many reminders of how utterly insignificant human history is compared to geological history. Normally I would put geology at the bottom of the list for interesting subjects. But there are reminders all over the park (and in fact the whole of the area) that serve to remind me that time, as measured by the ancient land forms and the fossilised life hidden in the rocks, is literally incomprehensible to humans.

I would recommend a visit to The Bunkers in the north of the park to give you an idea of what I mean. The first time I visited this area (which hardly anyone goes to) I walked up Wilkawillina Gorge. The range on both sides is very old. The strata has tipped over until it points to the sky and then eroded down to low hills that look as if they have been painted with stripes. If you pick up any rock you will find the fossilised remains of archaeocyaths (“ancient cups”). These are the first animal on earth with an internal skeleton. They once made up vast reefs of living organisms in seas long gone. The range is the fossilised remains of an ancient Great Barrier Reef.

This is geologic time but then there is human time. I decided to walk up the hills at the top of the gorge and then return via the range. As I wandered along I came to a rock outcrop only a few hundred metres from some springs in the gorge. It was shaped like a table but with a sheet of rock along one edge that made a perfect wind break. I sat on this “table” and thought what a wonderful place it would make for a sleeping spot as I chewed on a muesli bar. I looked down and realised that all around this rock was hundreds and hundreds of water snail shells. The remains of many meals. That is when I realised that I wasn’t the first one to think what a great shelter this rock made. Many, possibly hundreds, of generations of people had thought the same thing before me.