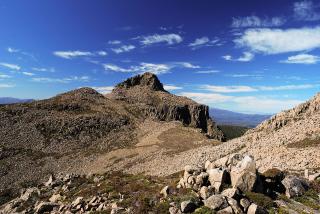 My favourite trip in Tasmania is the Easter and Western Arthurs, which is right next door to Mt Anne. I usually do both Arthurs in the same trip and then rest for a day or two at Mt Field National Park. Which has mankind's two greatest inventions. Hot running water and a toilet you can sit on. And if I have a bit of spare time I sometimes squeeze in Mt Anne. I have done the round trip - Mt Anne, Lightening ridge, Lake Judd and then back to the road. But I usually just do Mt Anne.

It is a pretty easy hike and if you started early you could do it in a day. But most people spend at least a night. Usually camping on the plateau or sleeping in the High Camp Hut. Looking at most of these photos might make you think that southern Tasmania is all blue skies and sunshine. On the particular hike that most of these photos were taken on, that was indeed the case for the four days I was there. But that is so unusual that this hike is very vivid in my memory to this day. It is the only hike I've done in the area where I had dry boots EVERY SINGLE DAY! Every night I was there I marvelled at the sensation of dry socks.

But the next time I was there I did the full Mt Anne circuit. Starting along the south side of Anne River, up to Mt Sarah and then spent two nights on a ridge above The Lonely Tarns. It bucketed. Every low point was full of water and the rough track up to Mt Sarah was (perfectly literally) a stream. I couldn't camp next to Judds Charm or Lake Piccone (the usual campsites) because they were both under water. So I was up on the ridge taking the full brunt of the weather for two nights because the terrain between Mt Lot and Shelf Camp is not something you want to do in howling wind and rain. I never saw Mt Anne that trip. Just clouds. But you take the good with the bad and it was a challenge - which is a good thing!