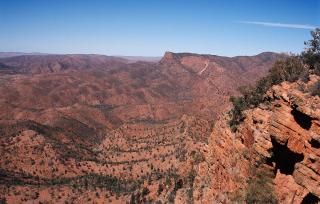 The Vulkathunha Gammon Ranges National Park is one of my favourite places to hike. It's wild and rugged with only a few four wheel drive tracks on the plains but mostly easy to get around in. You can roam the ranges or the deep gorges that separate them and not be bound by roads and tracks. There are amazingly beautiful waterholes in unexpected places. I have been there when it has been bone dry with water only in the most dependable waterholes and I have been there when some of the gorges have been impassable due to running water and even waterfalls. But it is a wonderful place to explore with no set plan in mind. There are places where the terrain or scrub make it hard but there is always a way around or over and it is easy to get tempted to go and have a wander and check out some little gorge, bluff or ridge line. The only constraint is water. Make sure you check with the locals and the parks people as to which waterholes actually have water in them. I would highly recommend buying a copy of “The Walks of the Northern Flinders Ranges” by Adrian Heard. This gives you an excellent guide to walking through the Gammons.

There are no foot tracks and the terrain and scrub can sometimes make navigation problematic. You need to know how to read a map, use a compass or GPS and have some common sense. And, as always, have a Personal Locator Beacon with you at all times. The cliffs and gorges are made up of crumbly sandstone that can give way very unexpectedly. Also, if there has been any kind of rain, the rock can be amazingly slippery.

A ranger once told me a story about what it took to get a corpse of a hiker out of the range. He had a fallen off a cliff face while trying to climb down into one of the gorges from the range. About two weeks later I had climbed up to Blue Range from Mainwater Pound, intending to climb down to Crocker Creek Gorge via Crocker Saddle. But I must have gone down the wrong gap because it got steep, then very steep and then, from the little creek line/gorge I was following down, I came out above the cliffs of a magnificent natural amphitheatre at the top of the gorge. I have to be truthful and admit that on many, many occasions I have not done the sensible thing and retraced my steps and tried again. Instead I have continued on – ignoring the danger (which is fun) and being a bull headed, lazy idiot. The way down was loose dirt, gravel and needle grass on large and small slabs of rock. Mostly vertical with ledges here and there and it was a long, long way down. I probably could have made it and I actually started to give it a go. Then I remembered the story about the dead hiker. Then I also remembered that the body had been evacuated from Crocker Creek Gorge – the same gorge I was trying to get into. So I chickened out and climbed back up and traversed Steadman Ridge on the western side of the gorge instead.

The lesson of all of this is that I have successfully survived some ludicrously hard, difficult and dangerous treks and detours. Many times because I couldn't be bothered to go back and do it correctly or sometimes because it looked like fun or simply because I underestimated what was involved. I have always proved to be stronger, tougher and more wily than the terrain. BUT! I only have to get it wrong once - to be wrong forever. So always seek out a challenge but don't be an idiot!