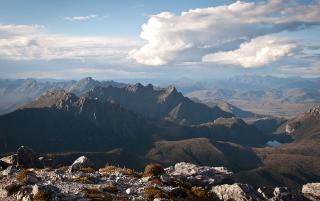 I love hiking in Tasmania. It is probably my favourite place to go bush walking and the Western and Eastern Arthurs are my favourites of all the walks in Tasmania. I usually do the two together as one walk. The draw back to this is that you have to carry two weeks of food and fuel on your back but it is worth it. The Eastern Arthurs only have two really hard bits. Luckmans Lead, which takes you from the plain up to Stuart Saddle (the first campsite on the range) and Four Peaks.

Luckmans Lead is not dangerous but it is bloody hard work sometimes. For something so steep it has ludicrously bad bogs but it is really just hard work and mud. Four Peaks, on the other hand, is rock and a lot of going up and down, sidling around things and pack hauling (make sure you take rope for getting down cliffs and drops). Although some of the worst and most dangerous ascents/descents have been bypassed now it is still hard going. But there is still potential for serious injury or worse.

As always in Tasmania, the weather can make something difficult into something very dangerous. The campsites compared to the old days are fantastic. The very first time I camped at Stuart Saddle I had to wedge my soaking wet pack under one side of my sleeping bag or I would have rolled straight through the wall of my tent. Both my head and my feet were lower than my belly and I could hear the water as it flowed around my tent on the way downhill.

What made it worse was that it was a three man tent. The two mates I did the trip with chickened out on the plain before we even got to the range. So not only did I have to carry an insanely oversized tent but also try and get through a full (deli) sized salami. I ate salami every breakfast, lunch and tea on that trip. To this day Mettwurst salami gives me the shudders. You had to get water from drips under the cliff and the track was much, much worse than nowadays. Much rougher, muddier and more dangerous but also confusing with many false pads.

But Federation Peak is the culmination of the trip and absolutely worth all the pain, suffering and effort. Of the five or six times I have done the trip I have only been able to get to the top less than half of the time. The first time I did the climb I awoke to a crystal clear blue sky and golden dawn and I set out from Thwaites Plateau to make the ascent only to have it covered under cloud by the time I got to the final ascent. I climbed it anyway (it was dry and still – just foggy). But what a let down! Still, you have to be sensible. When the weather is bad, when the wind is high, when the rock face is streaming with water or snow – then you are an idiot if you try it. Keep a few days in hand so you can wait out bad weather. But if you don't get to climb Federation Peak (and more than a few parties take one look at the final ascent and turn around) do not be disappointed. It is still one of the best and most beautiful bush walks in Australia.