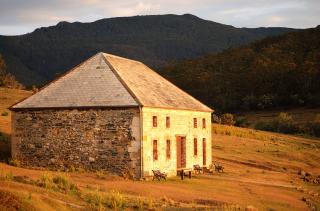 Maria Island is a lovely little island off Tasmania's east coast. (Maria is pronounced “ma” “rye” “ah”). The animals are plentiful and very tame and there are lots of interesting things to see and do. You don't really need to hike anywhere once you get off the boat at Darlington. You can get to any place on the island and back again in one day if you start early enough. You can just potter around doing little day walks. There is accommodation at Darlington or you can pitch a tent in the camping area. There are also some remote camping sites around the island if you do want to hike.

It started off as a convict settlement established in 1825 for convicts guilty of lesser sentences or for convicts returned from working for settlers. I wonder if any of my ancestors resided here? Probably not, they were a bad lot from all accounts and probably would have ended up somewhere harsher. For its time and setting it was considered a place of “ease and pleasure”. This in fact became a source of worry for the authorities – as did the prevalence of sodomy.

Maria island was originally discovered by Abel Tasman in 1642 and was named after the wife of the Governor General of Batavia. A French scientific expedition, under Captain Baudin, spent eight days charting the island in 1802. They met the local aboriginals and found aboriginal “tombs” and spent much time writing, drawing and collecting samples. In the little museum at Darlington I read an extract of an interesting encounter between the local aboriginals and the French that typifies for me one of the reasons the gap between Europeans and the first Australians was so rarely bridged. One of the Frenchman (being French!) tried to kiss one of the local (male) aboriginals on the cheek. The aboriginal (like many cultures and nations before European contact) was unfamiliar with the concept of a kiss. He looked alarmed and startled at first but politely masked his emotions and froze and did not react. The French decided from this that the “natives” were unfeeling and incapable of deep emotions such as love! If they did the same thing to a modern Tasmanian, I wonder what the would make of the broken nose they would probably get in return?

One interesting result of the French expedition was that the colonial authorities were so worried at the presence of the French that British settlement of Tasmania began the following year – in 1803.