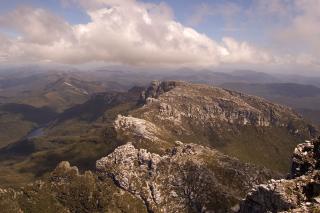 Frenchmans Cap is a funny walk. The only bit that is hard is crossing the Loddon Plains. But the famous "sodden Loddon" is really more irritating than hard. The plain is very poorly drained dirt barely held together by button grass roots. Every hiker breaks up those roots with their boots and turns the track into bottomless bog. So the next hiker goes around the bog - with exactly the same results. So you get "braids" of tracks that twist and intertwine and are many metres wide. Even so, some work has been done and it really is much better than it was.

The first time I did Frenchmans Cap it was with a mate and a chat with a ranger convinced us to just slog through the mud on the way back and just not worry about it. The problem with this is that sometimes there is something solid (or semi solid anyway) to walk on at varying levels under the mud. But sometimes there is literally nothing but a bottomless pool of mud that leads to the centre of the earth. My mate stepped on something solid, then something solid and then his leg went into the mud and just kept going down. He put his other leg in to push himself up and both legs disappeared right up to his bum. Luckily, I was behind him (better him than me!). But we couldn't get him out. It sounds ridiculous and it was. But after five minutes of stuffing around, I ended having to backtrack until I found something solid to dump my pack on, go back and get his pack and then, while balanced precariously on a tuft of button grass, grab him under the arms and slid him back to land on his backside.

Luckily, you cross the Franklin River (there is a suspension bridge) just before the car park and you can clean it all off. Traditionally, this is where everybody ignores traditional body taboos and strips off and washes off no matter how many strangers are around. (Actually, maybe that's just me?)

One day it will be duck boarded all the way like The Overland Track. That will be a sad day because the whole point is the adventure and challenge to get there. Not just to go there, take some photos for Instagram and then head back. I'm not trying to go all zen on you but the journey is important - not just the destination.

Besides, once you get past the Loddon Plains the trip is very pleasant. You end up at Lake Vera and can camp around there (or stay at Lake Vera Hut if there is space) and do Frenchmans Cap as a day trip the next day. Or continue on to Lake Tahune and camp there. There is a hut at Lake Tahune but it's small. Actually, for both huts you should never depend on being able stay in them as they are often full of hikers. So make sure to take a tent.

There are some interesting side trips like Irenabyss but Frenchmans Cap is located in the Franklin Gordon Wild Rivers National Park and it is very wild! So side trips are only for the really adventurous and well prepared.